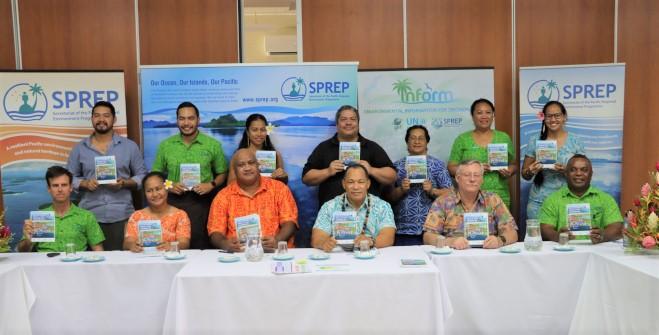 A useful and easy-to-access guide, designed to help SPREP Member countries implement and track environmental indicators, has been launched.

The Environmental Indicators for Pacific Island Countries guidebook, which explains the development and use of environmental indicators and provides a summary of each of the 34 core indicators across six broad themes, was launched by SPREP Director General, Mr Kosi Latu, and the head of the United Nations Environment Programme (UNEP) Regional Office, Mr Sefanaia Nawadra, last week.

The virtual launch was hosted by the Inform project, which is a five-year project funded by the Global Environment Fund and UNEP. It is implemented by the Secretariat of the Pacific Regional Environment Programme (SPREP).

An environmental indicator is a measurement that provides insight into a matter of larger environmental significance. They quantify information so its significance is readily apparent and so that trends can be determined over time. They also simplify complex phenomena which helps in communicating messages to decision makers and the public.

Through the Inform project, SPREP programmes contributed to the development of 34 indicators that were endorsed by Members at the 2018 SPREP Meeting. These indicators are intended for use in State of Environment Reports and other reporting obligations.

“Under the SPREP Strategic Plan, SPREP is happy that it is supporting the development of national Sate of Environment (SOE) reports and National Environmental Management Strategy (NEMS) for its Member countries,” Mr Latu said.

“The reports are built on a foundation of indicator data that help guide the development of sound environmental policy and legislation by decision makers and regional partners.”

“The increased uptake of standardised environmental indicators by Pacific island countries will assist SPREP in prioritising and tailoring project development to Member needs and to help track the environmental health at the regional level,” Mr Latu added.

Mr Nawadra  reiterated the sentiments relayed by Director General Latu, and congratulated the Inform team and Member countries who contributed to the development of the guidebook.

“One of the key challenges is an agreement on what data to collect and also general guidance on what the indicators could be in various regions. The work of identifying the indicators was left to the regions themselves and I’m glad we can finally distil this into a guidance document that people can easily understand,” Mr Nawadra said.

He said the Guidebook contributes to the global work, noting that one of the continuing issues in the Pacific is being able to contribute to global and regional assessments, especially in the case of the Asia-Pacific region.

“In most reports on the Asia-Pacific region, you’ll find a lot of data on Asia but very little on what we do in the Pacific. So, things like this and the effort that’s been put in by the Inform project helps to bridge that gap. But it needs countries to understand and value the need for doing this because this will not be sustainable effort unless countries themselves recognise and put resources into the work.”

Copies of the Guidebook have been mailed to all 14 Pacific island countries under the Inform project, and a free e-copy can also be downloaded from the Pacific Environment Portal